Biomimetics is the study of nature and the natural world to inspire design of engineering solutions and technology. Dunlop has infused three technologies into their Biomimetics line.

Dunlop has a system for naming it's new Biomimetic line of rackets, which we view as a welcome change from the traditional industry approach of using meaningless adjectives as racket names.  Below is a modest explanation of Dunlop's naming system.  There are two categories of Biomimetic rackets for adults:
The F, M, and S represents the swing type for which the racket is best suited. F represents faster and fuller swing styles; M represents moderate swing styles; S represents short or slow swing styles. The racket's head size is represented by a number (2.0 is the smallest at 95 square inches and 8.0 is the largest at 115 square inches). For example, F2.0 is a racket with a smaller head size for a player with a fast and full swing.  Although all swing styles are not available with all head sizes, it does allow players with slower or shorter swings to use a racket with a smaller head (like the S3.0 Lite model), or players with faster or fuller swing styles to use a larger head (like the F5.0 Tour).

Below is an extremely useful chart explaining the Dunlop racket that competes with rackets from other companies. For example, if you like the Babolat Aero Storm Tour GT, consider the Dunlop M2.0 or Max 200G. 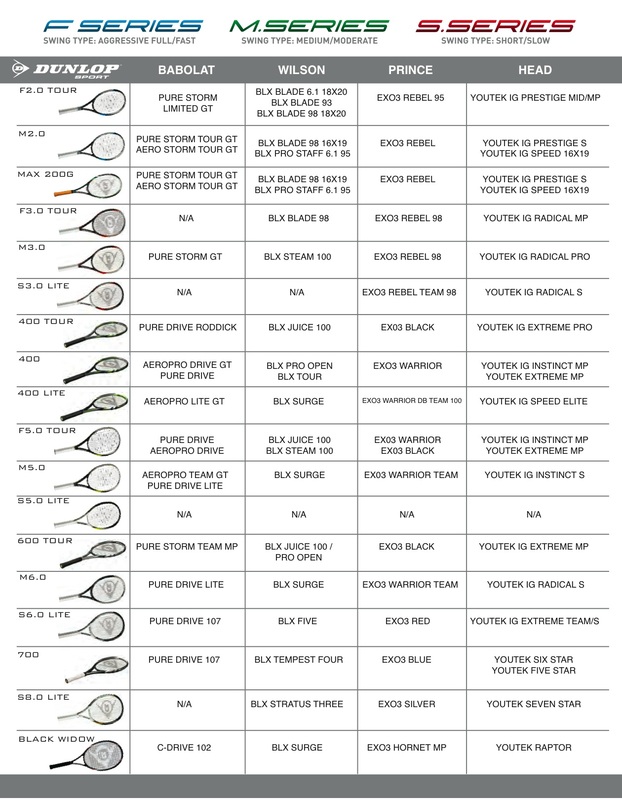